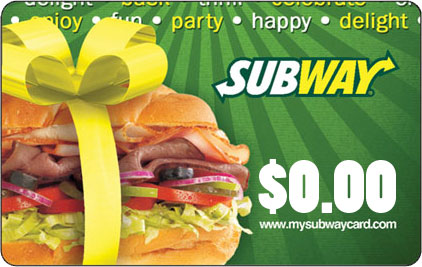 Apparently some of Subway Canada’s gift cards that Shoppers Drug Mart stores are giving out during their promotions are turning out to be empty. I’ve gotten several complaints about this. This is probably unintentional from Shoppers Drug Mart and Subway Canada but the way they treat their customers once the empty gift card is reported in unacceptable. Also, how hard could it be to check these gift cards have the correct amount before handing them out?

Here’s a complaint from Carolyn D, one of the people who had this problem:

Recently, after purchasing over $50 of product at Shopper’s Drug Mart, I received a Subway cash card worth $10.  As I am diabetic and on a small fixed income, I usually do not buy any type of fast food or eat in restaurants.  However, since the card expired today, I decided to use it.  I purchased a 1/2 sub and a vegetable only salad. Total $9.12.  I was embarrassed to find that the card showed no balance.  Fortunately I had $10. so was able to pay for the purchase which I did not want anyway.  I drove back to the Shopper’s who issued the card.  They denied any responsibility and told me to call the number on the back.  It was apparent that this has happened before.  Calling that number gave me a lot of voice mail but no resolution.  I called another Subway who told me that they have had quite a lot of them that are no good.  I am so very angry.  I want my $10.00 refunded.  I do NOT have money to waste on take-out food.  This was my first and l ikely my last visit to a Subway store.  What’s more I will likely limit my purchases at Shopper’s Drug Mart as well.  How do large companies like yours succeed when you treat the public with such disdain?  I will write to my local TV station ombudsman and my local newspaper if necessary.  I find this despicable.   Your stores should have been told to honor the cards and then you reimburse them instead of having customers spend what is now 1 1/2 hours and more than 2 liters of gas trying to take advantage of this so-called FREE offer. This is worse than FREE offer of a card usuable at restaurants that don’t exist in Chilliwack! Carol

0
X
Canadian Discount Stores: Giant Tiger Vs Bargain Shop…Other / CanadaLast night I got thinking (something I do on occasion.) Giant Tiger and Bargain Shop are quite similar but which one is better? I have found over the …