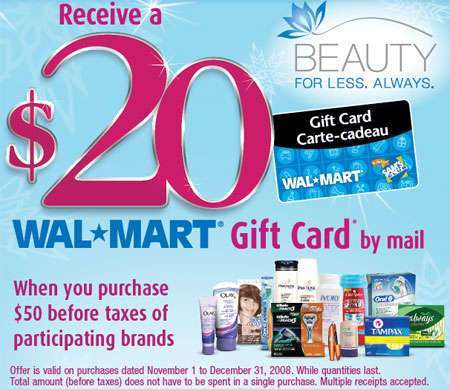 Thanks Wakeforsoul for posting this sizzling hot Walmart promo on the Canadian Shopping Deals Forum!

Receive a free $20 Walmart Canada Gift Card by mail when you purchase $50 before taxes of participating Proctor and Gamble (P&G) brands. Multiple receipts are accepted so you don’t need to spend all the $50 at once 😀

Participating brands are any size or version of:

To receive your $20 Wal-Mart Gift Card by mail, print and fill out this rebate form and send in your cash register receipt(s) dated between November 1 to December 31, 2008 with the participating products circled accumulating $50 (before taxes).