Air Canada has some new deals weekly deals on flights available on popular routes in North America and around the world! Head online to Air Canada now and you can find discounted flight tickets for as low as $145 one way! Many of these deals are ending at midnight tonight, so be sure to head online and check out these offers before they’re gone! 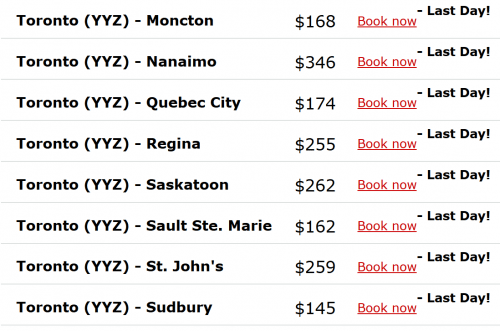 This week’s deals from Air Canada aren’t as hot compared to deals offered by Porter, but there are still some pretty decent savings no select flights available. This week you can purchase one way tickets from Toronto to Moncton for $168, or Toronto to Sudbury for $145. If you’re looking to fly to the US, Air Canada has some decent deals including flights from Toronto to New York LaGuardia for $145.

These deals end at 11:59pm ET on November 5, 2015. Flight prices depend on seat availability. Extra fees may apply for some flights.

Click here to shop deals on flights from Air Canada.