KFC Canada has just released new exclusive offers members to its Colonel’s Club members so that they can save on their next meal. If you’re not already a member of the Colonel’s Club, membership is free and you’ll get 2 exclusive coupons for some great savings on a weekly basis! This week’s coupons include:

You’ll have to either show your member card, or the coupon in app when you go to claim these deals. The offers are valid in store only and there’s a limit of 1 coupon per customer per transaction. These deals are available until August 2, 2015. 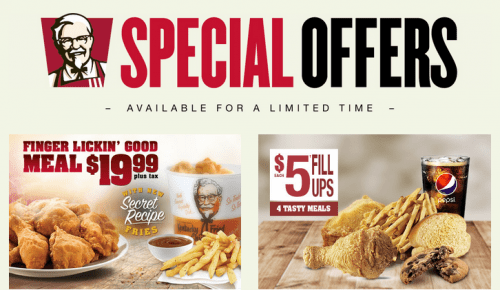 If you’re not a member of the Colonel’s Club, then there are still some great savings that you can claim, such as:

One response to “KFC Canada Colonel’s Club Deals: Save 20% Off Any Variety Bucket, $7.99 For Ultimate 4-Piece Big Box Meal, and More”

X
Via Rail Canada Discount Tuesdays Deals: Discounted Escape Fares on Select Economy and Sleeper Class…Canadian Daily DealsToday's Tuesday, so that means that Via Rail Canada has released their latest batch of deals on fares for select economy and sleeper class routes! If …