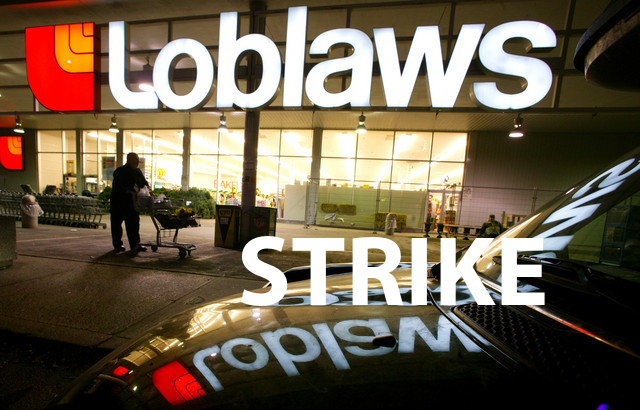 The United Food and Commercial Workers union says 1,600 workers represented by Locals 175 and 633 are involved in this legal strike. Negotiations towards a new contract will resume Thursday.

Members at 50 stores, including 5 Loblaws Great Food Stores in Nepean and Gloucester and 45 stores operating as Zehrs, Loblaws, Great Food, and RCSS throughout central and central north Ontario, ratified their new 6-year agreement. Members covered by a separate agreement at nine Zehrs Great Food and Real Canadian Superstore locations in Windsor-Essex, Chatham-Kent, and Lambton counties voted down the memorandum of settlement, which led to this strike. As many as another 60 stores represented by UFCW Local 1000A are scheduled to go on strike on Sunday in markets from London, Ontario to Ottawa.

“In light of the union’s decision to reject our offer and to strike, we have turned our attention to serving local customers and supporting our colleagues who will continue to serve them in all nine stores,” said Kevin Groh, Vice President, Corporate Affairs, Loblaw Companies Limited.

Loblaws says all nine affected stores will remain open, but with modified store hours (10am to 8pm) and a reduction of some in-store services.

In contrast to Loblaws company statements, Shawn Haggerty, President of UFCW Local 175, has said, “We are asking the people in these communities to not shop at the affected stores. These workers are counting on their friends and neighbours for support. Please do not cross their picket lines.”

The union has said the key issues in the dispute are wages, work schedules, benefits and limits on third party providers.

0
X
Cineplex Canada Summer Deals: Family Favourites Every Saturday Morning For $2.99…AnnouncementsSummer vacation is now in full swing for kids around the country. If you’re looking for inexpensive ways to keep your kids busy this summer, head over…