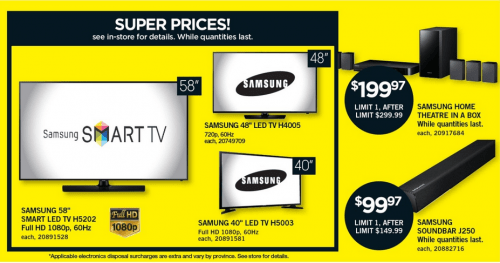 The Real Canadian Superstore has brought back it’s popular No Tax Event this weekend! Head into your local Real Canadian Superstore between September 18 and 19, 2015 and you could save the tax on your purchase of Electronics, Home, Toys, and Joe Fresh Apparel! With the discounts and prices on some items like electronics, as well as no tax, some of these deals are better than similar items you can find on sale during Walmart’s anniversary sale!

Deals in this week’s RCSS flyer include:

Because of the no tax event, some of the deals are better the Superstore than Walmart, however, if you’re looking to buy an Xbox One, Walmart’s deal is probably better since it includes much more.

Or click here to view deals in this week’s Walmart flyer.