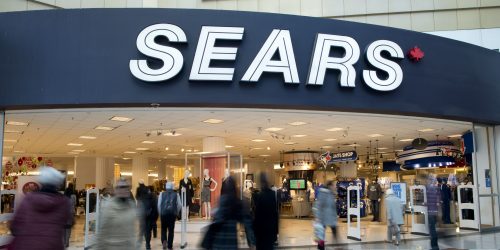 One of Canada’s most fabled department stores, whose catalogue has been a coffee table feature of most Canadians homes for the past few decades, made an announcement on Tuesday that there is “significant doubt” about Sears future and that they could be selling the company.

This announcement comes at the heels of many other staple Canadian retailers who are struggling to compete in the e-commerce world of online shopping. Sears reported in their first-quarter a loss of $144.4 million – which is a 15.2 percent decline in revenue from last year.

In their first-quarter results, Sears cites online shopping as one of the main competitors that is threatening their efforts to transform the department store for the modern consumer, saying:

“The company continues to face a very challenging environment with recurring operating losses and negative cash flows from operating activities in the last five fiscal years, with net losses beginning in 2014.”

There have been improvements in sales at Sears retail stores, partially due to their efforts of adding discount designer lines to their selection, their revenue still fell to just $505.5 million (a $90 million drop) largely because of a loss of interest in catalogue sales.

The department store giant has postponed their annual meeting, which was scheduled for Wednesday at 8am and Jeffrey Stollenwerck, who is not standing for re-election as a director, has resigned effective Tuesday.

One response to “Sears Canada Seeks Buyer, Raising Doubts About Its Future”