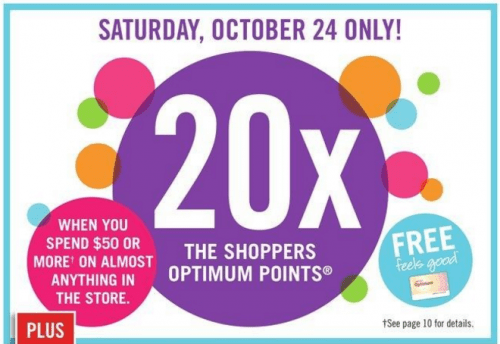 Shoppers Drug Mart Canada once again has an opportunity for shoppers to collect bonus optimum points towards free Shoppers products this weekend! Head over to your local Shoppers Drug Mart on Saturday October 24 and you could receive 20x the Shoppers Optimum Bonus Points when you spend $50 or more on almost anything in store!

As Saturday’s offer works with your purchase of just about anything in store, you can combine it with this week’s flyer deals to maximize your savings.

Offers in this this week’s Shoppers Drug Mart flyer include:

X
SmartSource Canada Philips’ Coupons: Save $80 On Philips Products…Canadian Daily Deals The SmartCanucks SmartSource printable coupons portal has been updated with new high value coupons that include: Save $ 20.00 on any one Philips Men …