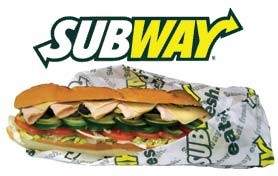 Turns out the new lower prices are only temporary until February 11, 2008 in celebration of Subway’s anniversary. HOWEVER, I asked if this promotion was nation-wide across all of Canada and I got a confident yes. Subway employees will not offer you this deal unless you ask for it. Weird and dumb I know but this is how they operate. No wonder they’re going downhill.

X
Dior Capture Soft Scrub Sample With Printable Voucher…Canadian Deals & CouponsFill in your information, print off the voucher and present it at any Dior counter for a personalized skin care diagnosis andÂ new breakthrough anti…

X
Pizza Pizza Canada Dinner & MovieCanadian Deals & CouponsThat's a good deal from Pizza Pizza. 2 medium pizzas and a 2 for 1 Cineplex coupon for $11.99. There are also other good deals on their website includ…