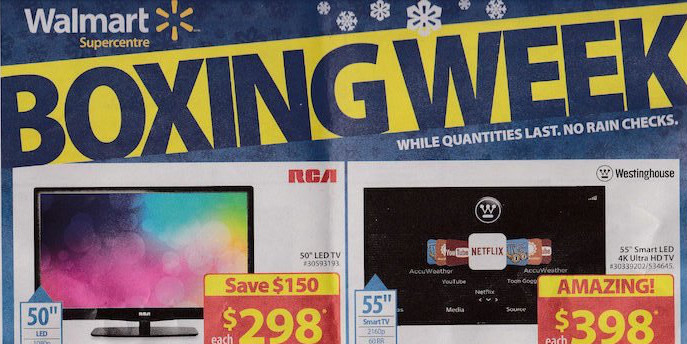 Some of Walmart Canada’s Boxing Day and Boxing Week flyer pages for 2016 has been released. Sale Starts December 26th, 2016 in-store and December 24th, 2016 at noon EST online at Walmart.ca.

Some of the hot deals in this Walmart Canada Boxing Day/Week flyer include:

And many more. Book mark the page, we will update the Walmart flyer as more pages are released.

X
Old Navy Canada Sale: Save Up to 75% Off Sitewide!…Canadian Deals & CouponsOld Navy Canada is having an unbeatable sale! Save up to 75% off sitewide now until December 25 2016. Order by tomorrow to get it on December 23rd! Ol…

X
Joe Fresh Canada Deals: Save 30% Off Sitewide + Free Upgrade to Priority Shippin…Canadian Deals & CouponsJoe Fresh Canada has a few deals that will help you with your last minute shopping! The deals include: Save 30% off sitewide using the promo code HO…