Everyone loves a Mountie 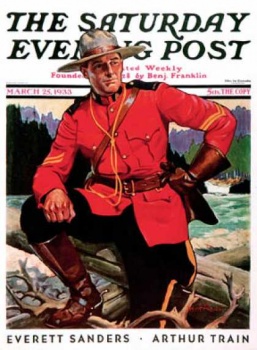 Over the years, more than a few celebrities have dawned the garb of the Royal Canadian Mounted Police. Seeing as today is Canada Day, I thought it might be fun to take a little photo journey through our celebrity snapshot book and see who has donned the garb of the mountie in the past. 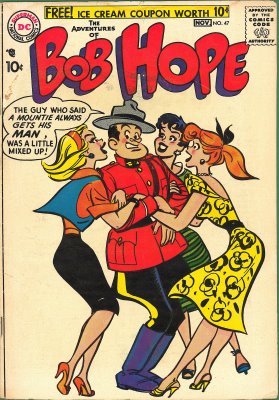 While I’m not sure if Bob Hope has ever actually donned the garb of our horsie-loving special forces, this comic book cover from October of 1957 would have us believe that he wore it proudly. Also, turns out it’s great for picking up the ladies. Not normally what we’d think of when it comes to the Mounties, but that seems like a give in when you think about it. 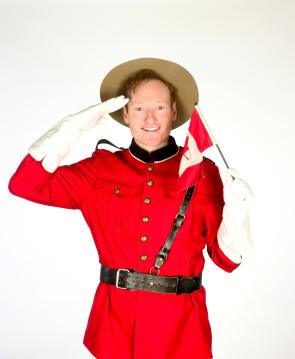 A little more than two years ago NBC decided to give it’s viewers north of the border a real treat. For one week in the Spring of 2007, Late Night with Conan O’Brien visited the city of Toronto. All of the week’s shows were recorded at Massey Hall, and the whole thing was viewed as a pretty solid success. I’d like to think a little of our Canadian magic rubbed off and helped him to land the Tonight Show gig. Don’t talk TOO loud about our magic though. The Americans don’t know about it yet. As you have likely gathered, his RCMP look was for promotional use regarding the shows visit. 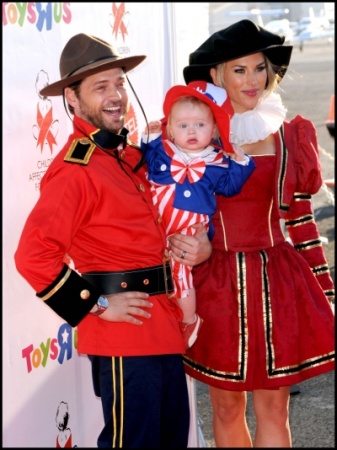 Former 90210 hunk and perennial Canadian heartthrob Jason Priestly donned the duds of Dudley Do-Right last fall at a charity function. He attended the Dream Halloween Benefit for the Children Affected by AIDS Foundation with his wife Naomi and daughter Ava, and made sure to remind the world of his Canadian heritage through his killer costume choice. 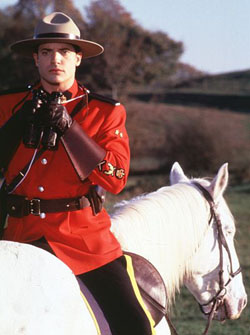 Speaking of Dudley Do-Right, it would be hard to forget Canada’s own Brendan Fraser performing as the aforementioned hero in the 1999 film of the same name. Then again, maybe it would be hard to remember. The film grossed less than $10 million worldwide. I’ve seen dog food ads do better. But we still love you, Brendan! 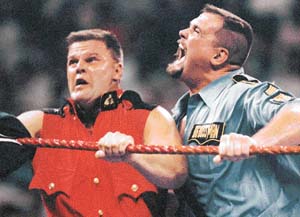 What would a widely identifiable image associated with a nationality be without a wrestling character to match? In the early 90’s, the WWF briefly featured as wrestler known only as The Mountie. Entering into a year long feud with the Big Boss Man about who would be the sole law enforcement official in sports entertainment, The Mountie eventually “retired”, and Jacques Rougeau (the wrestler under the red threads) returned in 1993 as one half of the tag team The Quebecers. Later incarnations of his career featured him in “The Amazing French Canadians” and “Team Canada.” Many thanks to Jacques for representing our nation in the squared circle for more than a decade (even if it was in the form of over-the-top stereotypes).

5 responses to “Everyone loves a Mountie”

X
McDonald’s Mondays: McMake it YourselfCommunity FeaturesLast week we thought it might be fun to see what kind of McDonald's foods you enjoyed. This week? We're going to give you the recipes to make them you…

Everyone loves a Mountie

X
SmartCanucks Caption Challenge: Week 28Community FeaturesHappy Canada Day, everyone! The patriotic posts continue on this fine day of national celebration as this weeks caption challenge has us taking a look…