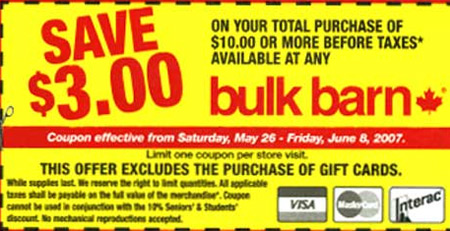 Get $3 off any purchase of $10. This coupon is in Bulk Barn’s flyer which should be available at each store.

Complete a 1 minute survey (at the bottom of the page) and get a coupon for $20 off any purchase of $70 or more at Mark’s Work Wearhouse.

I’ve been very busy lately and hadn’t checked my smartcanucks email for a while… today I went through my unread emails and guess what I found… not deals, not freebies… but facebook invitations! 😛 from people I’ve never met: and note that this is not my personal email!

Since there’s a lot of interest in facebook – I spend waste a lot of time on it too – here are a couple of hilarious facebook songs: 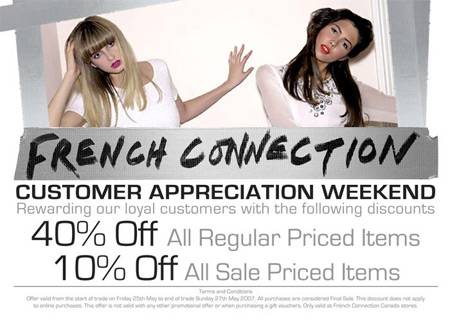 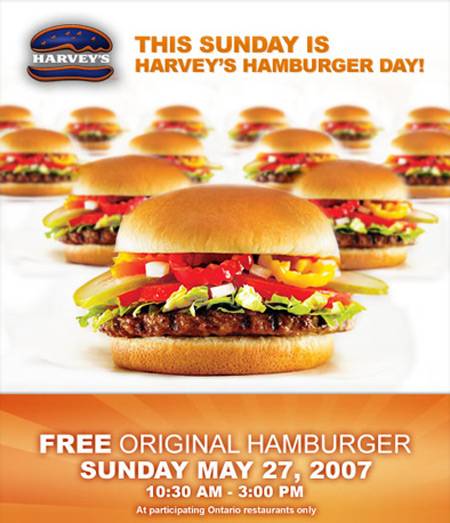 This Sunday only 10:30am – 3:00pm get a free Original Hamburger at participating Ontario restaurants… the burger in the above picture looks so yummy 🙂

I’m going to a wedding tomorrow, and I’ve had a heck of a time coming up with the right gift. We’re big believers in getting people gifts that stand out so they’ll always remember the who gave it, and there was little in their registry save for towels and dishes. While trying to come up with gift ideas this afternoon I came across DesignerGifts.com. If only I’d found out about this place two weeks ago, I could’ve gotten them something fantastic! Instead it looks like they’re going to be getting a popcorn maker.

I just thought I should bring DesignerGifts to everyones attention since, not only do they ship to Canada, but they have an entire section dedicated to cheap gifts. Despite the affordibility, most of the items in the cheap bin are very unique. Definitely something worth checking out the next time you have to get a gift for someone and you’re just not sure what they’d like. If you’re not worried about price, they have a good selection of other items too — like digital picture frames and gift ideas for men.

Next time you don’t know what to buy for that special occasion, you should definitely check it out.

It may be hard for you to remember back this far, but there was a time somewhere between the invention of the wheel and the election of George Bush the First when Eddie Murphy was funny. Really funny. Like – genius funny. During that period he released two concert films. The second of these films, RAW, contained four of my favorite minutes of McDonald’s related humour. Not so much because it was about McDonald’s, but because it was about an experience I think we’ve all had as a child when we ask our mothers to take us to McDix.

A bit of forewarning though — this clip does contain a mid-80’s Eddie Murphy level of profanity (about the same I’d use in regular conversation), so it may not be safe for work, kids, or soccer mom’s with a heart condition. If you enjoy this clip, feel free to check out this other great moment from RAW that was included as part of fjetsam’s April Fools collection.

McDonaldâ€™s Mondays is a weekly series of posts written by our own Jim Squires that initially appears on his pop culture blog fjetsam.com.

to your msn messenger contacts and send a message to Prue and she will add you to the chain.

Shoppers Drug Mart is having a new 20x refer a friend event. We set up a referral chain this time too to help everyone get more optimum points 🙂

If you already signed up for this event through the link emailed by Shoppers Drug Mart you CANNOT join the chain period. 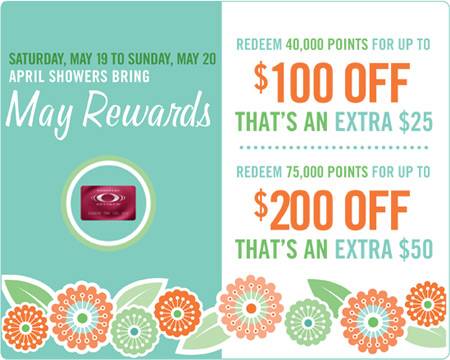 If youâ€™re a parent, chances are you have to sit through more childrenâ€™s programming in a week than you ever would in your life if you had the chance. Thatâ€™s not to say all of it is bad – in fact, some of it is quite good. In Canada, weâ€™re fortunate enough to have a number of excellent channels at our disposal that commit part of their programming to childrens television. With each of these channels being so different, itâ€™s hard to know which of these is most suitable for your family. Luckily, we here at SmartCanucks have the inside track, and weâ€™re going to share it with you in our seven part series â€œThe Best Canadian Kids Channels.â€

Ok – so it’s not exactly a “Canadian” kids channel, but it is available in most of Canada, so I’d say it counts.Â  If you’re fortunate enough to have a cable provider that offers the American PBS network, then chances are you’re fortunate enough to be able to show your children Sesame Street in the way it’s meant to be seen. Sure, cobbled down version such as Elmo’s World and Play With Me Sesame appear on Treehouse – but to get the real experience you’re going to need PBS. After all, how else will your kids learn about Big Bird?

In addition to Sesame Street, PBS offers an excellent selection of original toddler-friendly programming — much of it from the Jim Henson Workshop. Between The Lions, Bear in the Big Blue House, and It’s a Big Big World all hail from the house of Kermit.

PBS has another big plus going for it — if you’re fortunate enough to have an HDTV, PBS is the only children’s channel that offers HD content. There’s nothing creepier than a crystal clear Boobah, trust me.

The period of time in which children’s content is offered varies from region to region. Where I am it’s a rather small window, but what is shown in that time is some of the best. For the parents out there, PBS evenings offers some brilliant original programming. If you want to check it out but don’t know where to start, let me recommend History Detectives. Like most things on PBS, it’s both entertaining and educational – a surprisingly fun combination.

PBSKids.org is the national website for children’s programming on PBS, but since each station has it’s own scheduling and selection of programs the website doesn’t really lend any direct help in finding the shows your looking for.Â  Still — it’s a good starting point if you’d like to learn more about PBSKids.Â  Most local stations have their own websites complete with schedules, so if you google the call letters for your PBS you’ll probably find what you’re looking for.

This article was written by our very own Jim Squires. To check out more of his writing visit the pop culture blog Fjetsam, now updated daily.

I’m a big believer in buying namebrand electronics. For the most part, you get what you pay for when it comes to TV’s, cameras, MP3 players, etc.. That’s why, when I hear of a brand like “Protron” I instantly cringe. I checked online – the only thing I could find that offered any information whatsoever was a 64 page thread on LCD TV Reviews. Some people are happy with it, most people aren’t — and one comment stood out above all else. Remember kiddies, this is the internet and this really could just be from a disgruntled customer — but what if it’s not?;

“I work for Protron.

We are in a big dispute with the Chinese factory that makes Protron LCDs. No replacement parts will be coming, ever.

There are no remotes and no power supplies available.

PROTON has already won their lawsuit which prevents us from selling under the name PROTRON. As soon as they pay the bond, we are shut down.

Our management is in chaos. Our customer service dept is non-existant. Our rating with the BBB is ‘F’. The product is cheap because it is made with cheap parts. Getting the picture here?

If you buy a Protron LCD, you are completely on your own.”

One of a million reasons to stick to a namebrand. Besides – if you’re going HD, do it right. 1080p isfast-becoming the standard (when I went HD last fall it was barely available — I wish I’d waited!) and this unit doesn’t offer it. Just pinch your pennies — Samsung, LG and Sony all make 1080p HDTV’s in the 37″-42″ range for under $2000 now. I don’t expect them to go any lower.

If for some reason you’re still interested, this deal can be found here.

A navigation system is something I could never see myself using. Of course, I don’t travel into uncharted territory very often, so I’m probably not who they’re trying to sell to anyways. Still – couldn’t you just spend three dollars on a map instead?

Regardless of my old-man unwillingness to adapt to progress, this is a fantastic price on a GPS navigation system. A new non-refurb model is going for $399 at Best Buy. If you’re looking to add GPS and don’t mind refurb products, this is an excellent way to go.

You can grab this deal here.

Normally we’re quite pro-McDix around here on McDonald’s Mondays, however, in an effort to provide fair and mcbalanced coverage (and in an effort to showcase something really cool) we present The Bionic Burger.

While the first part of this video is a re-creation and the last part of the video is fact-based slander, it’s the middle part of this video that makes sitting through this worthwhile. In it, they showcase The Burger Museum — a collection of McDonald’s hamburgers that have been left out for years — the earliest being 1989 — and have yet to decompose.

This video is an attempt to plug the website thebestdayever.com, which is basically just a pricey weight-loss infomercial. That being said, images of The Burger Museum (including a live webcam of the most recent entry) are on a sub-page which I’ve linked to here.

So now when the nuclear winter settles in, we’ll have Twinkies AND Big Macs to munch on. The post-apocalypse isn’t looking so bad after all.

McDonaldâ€™s Mondays is a weekly series of posts written by our own Jim Squires that initially appears on his pop culture blog fjetsam.com.

Just because you’re all Smart Canucks doesn’t mean that some of you aren’t Single Canucks. Maybe you just haven’t met that special someone, or maybe youwouldn’t even know where to begin looking. But have you thought to try looking on your computer?

Online dating sites used to have the same stigma as newspaper dating ads, but as our lives are becoming interwoven with our computers more and more, online match-up’s have become the logical next step for a lot of single surfers. Don’t think of them as the evolution of newspaper ads — dating sites are more like MySpace with intentions. You’re letting everyone know all about you, and you’re letting them know you’re available. And don’t think you can’t make meaningful connections online — not only have many of us made friendships on the very forums of this site, but I first met my wife online! So believe me, it can happen.

A number of free dating sites have sprung up online over the past few years, however, many of them claim to be free when they actually offer their service free for women. It’s their clever way of making sure that there are always enough ladies in the house. JustSayHi.com is a fairly new site, and it’s absolutely free for both genders. Probably worth checking out. Their service covers Canada and the US, so if you live in a border town like me your circle of opportunity is even greater.

So what about you? Have you met anyone through online dating sites? Are you thinking of giving this service a shot? Tell us all about it!