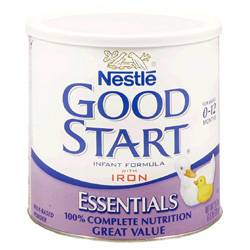 If you have a bottle-fed baby at home, take note: according to the FDA, Nestle Good Start infant formula’s nutritional content doesn’t match up with what’s promised on the label. What’s more is that the amount of calcium and phosphorous doesn’t meet minimum FDA requirements for infant formula sold in the US. The FDA came to these conclusions after an inspection of a Nestle facility in Eau Claire, Wisconsin.

The full letter from the FDA to Nestle is available here. Nestle has yet to comment on the findings, but this isn’t the first strike they’ve had against them regarding infant formula. The Infant Feeding Action Coalition of Canada (INFACT) has long been involved in a boycott of Nestle products due to purported abuses relating to similar products. For more information regarding past claims of poor behaviour on the part of Nestle, you can check out the INFACT Nestle boycott updates here.

X
Mother’s Day Gift Ideas: Full Bloom TeaCanadian Freebies, Free StuffThat's right boys and girls, Mother's Day is right around the corner. Sunday May 13th to be exact. But instead of forgetting all about it and rushing …

0
X
Future Shop Salesman Responds to “7 Lies” Article…Praises and ComplaintsAbout a month ago I posted an article that was originally posted at the consumerist entitled "7 Lies Youâ€™ll Hear From Salesmen At Future Shop". Clic…