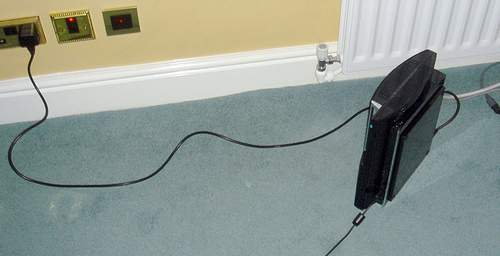 Sony often forgets to tout the coolest features on their systems.Â  The new PSP, for example, can hook up to your TV.Â  If you own a PSP and a PS3, you can stream videos and certain games to your handheld unit from anywhere in the world.Â  But the biggest feature that nobody seems to know about?Â  You can share downloadable content on up to 5 seperate PS3 units.Â  Loosely translated this means that almost any downloadable content you purchase can be shared with 4 friends, no strings attached.

Now before you jump the gun and cry “PIRACY!,” this isn’t some sort of hack or illegal trickery.Â  As a matter of fact, Sony encourages it.Â  In a 2006 interview with Wired magazine, SCEA President Jack Tretton went on record about the feature: “If a player logs into his PlayStation 3 account on a friend’s system, he can download any game he has already purchased. You can send that content to four other friends for that initial investment … We want to get the game in as many hands as possible.”

Now that we have that out of the way, on to the nitty gritty!Â  First things first — you need to have one or more friends that own a PS3.Â  You have two basic options.Â  You can either A) share your own PSN ID with friends you trust or B) create a new PSN ID for a group of friends to share.Â  With A, you’ll likely be sharing the games you and your friends have already purchased with each other.Â  With B you can set up a PayPal acct and all chip in to make group purchases of single titles.Â  Whichever route you choose, the rest of the steps will remain the same.

Step 2 is as easy as can be.Â  Create a new identity on your PS3, and then proceed to the Playstation Store.Â  You’ll be asked if you want to set up an acct or use an existing one.Â  Choose existing and put in the PSN ID info from your friend/group.

Step 3?Â  Enter the PlayStation Store and choose “Download List.”Â  It’ll bring up a list of all items purchased/downloaded on that acct.Â  Pick whatever you’d like and start downloading!Â  Once the downloads are done you can log back on to your original identity andÂ  the games will all be there on your games list.

Now you’re all set to enjoy a cornucopia of games that you might not have otherwise bought!Â  However – a few things of note.Â  First up — it’s not so much that the games are shareable on 5 consoles as it is that your download list is shareable on 5 consoles.Â  That means that you’re not going to want to handing out your PSN ID willy-nilly.Â  Make sure you’re trading info with a friend you trust and will be able to share with down the road.Â  Oh — and that trust thing?Â  Your PSN ID tends to save your credit card info for your convenience so if you’re not sure you want to trust someone with that you’ll want to go in and remove it before sharing. Â  Finally, it should probably be noted that not everything is shareable.Â  So far bigger titles like Warhawk and Gran Turismo 5 can only be played on the one console.Â  While Sony likes increasing the exposure of its smaller titles (hence the sharing feature) it’s bigger guns bring in the money, and they know it.Â  Luckily those titles are generally well worth the money and since you’ll be saving so much on the smaller items there’s no reason these should break your bank when they come up.

So there you have it!Â  Everything you ever wanted to know about game sharing but were afraid to ask.

One response to “Game sharing on PLAYSTATION 3”