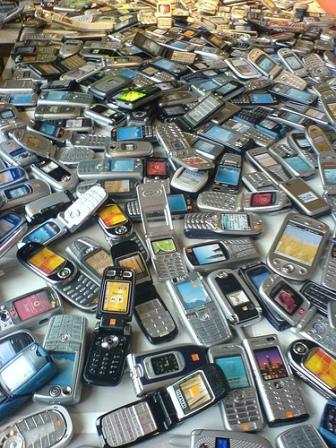 I finally got it over with. Today, I went to the advance polling station to partake in my democratic right by voting. I didn’t want to deal with the queue, forgetfulness, or mere procrastination come election day, Monday, May 2nd.

Anyway, as I followed the yellow Elections Canada signs, they led to a greeting desk. Behind the desk sat a girl…who was texting. Briefly, she lifted her head from her cell phone, asked me if I had my voter information card, directed me into the room, and promptly went back to her texting. Umm…okay.

Then, while waiting for my ID/voter card to be checked, a cell phone rang. Eventually, another Elections Canada Worker, a person whose job it is to check ID/cards, picked up her phone, and then promptly left the room to continue her conversation.

After I finished voting, on my way out, I overheard her conversation, and it wasn’t about a family matter, but a friend’s Facebook wall activity.  Huh?

Am I missing something here? You get $100/day to sit there to do a boring task. Accept your fate, bring a book/magazine to flip through while considering yourself lucky for your additional income.

Texting and chatting on a cell phone about Facebook is completely inappropriate – not to mention that it’s being done on tax payers dime! (And isn’t this misuse of technology violating some sort of privacy issue as you’re officially working a polling station?) Am I just old-fashioned or is texting/mindless cell phone babbling now part of societal norms?  If so, where was I when this happened, living under a rock?

I think I want to return to that rock right ’bout now.

70 responses to “Texting/chatting at the Elections Canada polling stations?”

X
Why are Canadians still being hosed?Other / CanadaAs I reached for my third bottle of $2.97 olive oil, a crowd began to gather, grabbing at the bottles, noticing the deal as well. The next thing on my…

0
X
TLC Extreme Couponing RevisitedCanadian Deals & CouponsA while back I made a post about the new TLC show called "Extreme Couponing." Apparently the show is here to stay and is now a tv series.  A lot of pe…